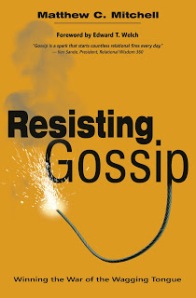 I knew from the front and back covers of Resisting Gossip that I would like this book. On the first page Ken Sande, author of the life-changing book The Peacemaker, gave the recommendation. On the last page I learned Matt Mitchell graduated with a degree in biblical counseling from Westminster, todays bastion of the biblical counseling.

Mitchell’s definition of gossip (“sinful gossip is bearing bad news behind someone’s back out of a bad heart”) has three elements: content (“Seth is rude”), location (Seth is not around), and motivation (I’m not trying to aid Seth). This was helpful definition.

In case we memorized Proverbs 18:8 and 26:22 in the KJV, Mitchell wants to clarify: “The words of a whisperer are like delicious morsels; they go down into the inner parts of the body (ESV).” This is quite different from the AV, which says “wounds” instead of tasty treats. “Wounds” makes sense (gossip hurts ), but the Hebrew root probably points to chocolate fudge that is difficult to resist—just like gossip.

He introduces five kinds of gossipers: the spy (loves to find dirt on people), the grumbler (loves to criticize), the backstabber (loves revenge), the chameleon (loves to fit in with the crowd),and the busybody (loves to gossip for titillation). I wasn’t sure into which category I fit but regardless, a key point is that we should assume the best, not the worst in another’s motives unless the facts are incontrovertible. He excels at giving the reader loads of lists and Scripture passages

Some Bible teachers and authors give the impression that whenever gossip starts to flow, the only proper response is a hand-raised, palm-outward sanctimonious announcement: ‘Stop! This conversation is not gossip, and I will not be party to it,’ as if we, as Christians, are called to be the gossip police.

But This is What I Don’t Get…

Why didn’t he point out that the sin of gossip (as seen in both men and women) is a greater temptation and sin for females? If women balk at this line, why is it that everyone accepts lust and a bad temper to be sins most prevalent in men, but we cannot point to sins more common in women? Mitchell observes:

Women get blamed for being gossips more than men do because they are more relational by nature and more interested in the things that make up stereotypical gossip. Gossip, though, is a gender-equal sin.

Are dirty magazines a gender-equal sin? Over-work? Rape? Are there any sins on which women have a monopoly? If so, what are they if gossip isn’t among them?

Conclusion: Kudos to Mitchell for using so many Scriptures to tackle what Jerry Bridges calls a “respectable sin”.