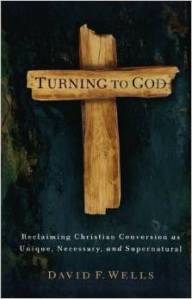 This is a book about conversion—turning to God. Wells recognizes that because people have so many different backgrounds and Scripture uses a host of different terminology, there are a myriad of ways conversion can be expressed. So we shouldn’t necessarily panic if the testimonies of Margaret Jones and Mzukisi Quobo sound very different because while conversion stories differ not in what Christ has done they do differ in how a person turned to him.

In chapter one he tracks down the meaning of epistrepho (conversion), metanoeo (repent), and pisteuo (believe), then uses the rest of the book to distinguish between insider (much Christian knowledge before coming to Christ) and outsider (little Christian knowledge). For the former, the gospel is the last piece needed for the puzzle. The latter needs a fresh start.

There were a few areas of concern. At times Wells seemed to sympathize with paedobaptism, though elsewhere he says: “There are no people whom we can predict will be believers.” But isn’t this exactly what paedobaptists believe? Doesn’t it symbolize probable future regeneration? Another point giving pause was his answer to the question: “Are certain people (based on environment, personality etc.) more susceptible to conversion than others?” Wells says no way, and uses a little Scripture (the stories of Jews and pagans believing) and lots of psychology to prove this. This seems to be at odds with 1 Corinthians 7:14, where the believing spouse makes the other unbelieving family members “holy”. Their chances of conversion are greater within the marriage than without. Moreover, don’t those in Winston Salem have a greater chance than those in Dubai? The matter of personality types in relation to conversion is more difficult to answer. I wish he had taken this further.

Overall, however, there is much to like. Wells defines his terms well. “If [your conversion testimonies] do not involve turning from sin to God, on the basis of Christ’s atoning blood and by means of the Holy Spirit’s work, they cannot be called Christian” (13). Again, everyone must “see Christ as their sin-bearer, must repent of their sin, and must in faith entrust themselves for time and eternity to him” (24). He also attacks “decisions” emphasized in revivalistic churches and says pushing children for such decisions “even if this is done with the best of motives” is not the best” (68).

1 thought on “Review: Turning to God”