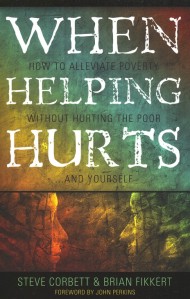 The authors apparently see poverty as a disease. On page 56 they ask: “how can we diagnose such a complex disease?” Later on the same page they refer to the “disease of poverty”. They say, “reconciling relationships is the essence of poverty alleviation” (130). Again, the book is filled with schemes and charts and diagrams but surprisingly, very little Scripture.

Just imagine John Paton’s pastor saying this to him before he reached the shore of the New Hebrides, where the cannibals there had cooked and eaten two missionaries several years earlier: “A significant part of working in poor communities involves discovering and appreciating what God has been doing there for a long time! This should give us a sense of humility and awe as we enter poor communities, for part of what we see there reflects the very hand of God” (60). Corbett and Fikkert refuse to assert that there may be some people groups that are godless in every sphere of their society. This would imply inequality, which they are against. Were Jewish and Amalekite cultures equal?

Who are the poor? “Every human being is poor in the sense of not experiencing these four relationships in the way God intended.” To say that only some are poor would make them feel bad. So, we’re all poor! (62) Poverty is “broken relationships”. Its not until page 71 that they finally acknowledge that the poor are “those who are economically destitute.”

The general feeling I got from this book is that people are poor because of outsiders. The problem is without and not within. Now that is partially true. Jesus, the sinless man, was poor. Scripture speaks of poverty as a result of wicked resources and natural disasters. But there is also a wide swath of verses pointing to laziness, poor planning, deception, broken families and a host of other sins as the root of economic poverty. After living nearly a decade within a poor village, my conclusion has been that much of the poverty is due to an unbiblical worldview. Polygamy, sleeping around, and child grants to 16 year olds has pushed the HIV rate in Mbhokota to 50%. My unemployed neighbor got his teeth kicked in last week, but when I went to visit him his wife said he was back at the same bar where it happened. Roads are in disarray as the contractors use half the materials in order to pocket the rest. President Zuma has built himself a multimillion-dollar compound on taxpayer money.

Instead, the authors rebuke churches with “god complexes” that are trying to help.