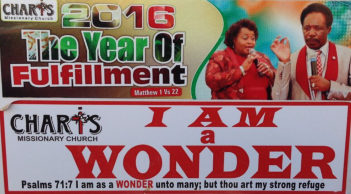 “You are healed!” This was what one charismatic woman declared over me recently upon hearing of my flu-like symptoms. When I told her my illness was just the same as it was a minute ago, she implied it would pass in a couple of days. “Sickness has no power over you, man of God.” If only this were true.

This lady didn’t know it, but she was exhibiting one of two common marks of the Prosperity Crusades: (1) pre-arranged settings and (2) delayed healings.

The Prosperity crowd typically does their healings in sterile, pre-planned environments so they can control who comes and goes. Paraplegics? Downs Syndrome? Amputees? Not a chance. These wily hucksters are looking to heal heart failure and headaches. Bodyguards protect the stage in order to vet each person who wants healing. Everything is orchestrated perfectly.

Contrast this with Jesus, who didn’t need to touch or even see the official’s sick son. He healed him from 25 kms away (Jn. 4:50). Elsewhere, Jesus happened to be at Peter’s house when he healed his mother-in-law (Mt. 8:14-15). Humanly speaking, the healing was unplanned and impromptu. The same thing happened with Peter, who healed the cripple en route to the temple (Ac. 3:6-7).

There are times, however, when those thirsting for a cure don’t play along with the charlatan on stage. Their arm was lame and it’s still lame. What now? This is when the idea of postponed healings comes into play. Like the woman said earlier, sometimes healings take a couple of days to kick in.

For those church con men who claim to follow in the footsteps of Jesus by healing the sick, a good place to start would be with immediate and spontaneous healings. Anything short is fraud.

3 thoughts on “Duped By Delayed Healing”