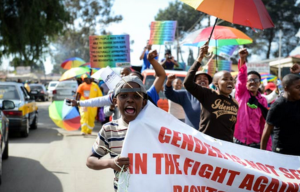 Satan has many strategies for making sin palatable. One tactic is the use of language. If he can make wickedness a part of everyday parlance or if he can edit out certain vocabulary with confining baggage and replace it with more appetizing terminology, half the battle is won.

Nowhere are these methods more obvious than in the arena of today’s sexual revolution. This is not merely a Western problem. The vessels of homosexuality washed up on African shores years ago—an innumerable fleet behind them.

As a missionary in rural Africa for over a decade, I have seen first hand the full-throttle pursuit of the West to cram the enlightened sins of the city down the villager’s throat. In a recent article in South Africa’s Mail and Guardian entitled “Searching for New Queer Terms”, the author tries to prove that old demonic scheme: change the vocabulary; change the mentality; change the behavior.

The argument runs like this. Since the LGBT crowd in Africa can only use English for their movement, the people are less likely to embrace it. Adopting African terminology for homosexuality would then make it more acceptable.

What should African Christians conclude amidst so much confusion? Here are five observations.

The author knows that Africans prize Ubuntu (“I” exist because of “we”). So he must negate the African fear of taboo. He denies “bad things are happening in the community — lack of rain, crime, ritual murders …because of you or your behavior.”

Biblically, however, sin is not just personal. The snarled roots of wickedness are so complex, they contaminate every tool designed to remove it. Sin is never alone. David’s sin brought death to 70,000 men (2Sm. 24:15). Israel’s pride left several dozen soldiers with widows (Jos. 7:5). Achan’s sin brought destruction to his wife and children (Jos. 7). Homosexuals proceed not only to their own hurt, but to the detriment of their surrounding society.

Says one UNISA prof: “We will not offend anyone. We need to use language that is not offensive.”

Out of the question. This world of sin will forever be in opposition to its Creator. Humanity is “hostile to God” (Rom. 8:7) and will always be hurt, upset, and angry with the Bible’s message unless the Spirit does a transforming work in the heart.

The question is not if something is offensive but if it is true. I know many in South Africa who hate blacks but take offense when called a “racist.” Should this term then be discarded? No, because it is true.

Christians must be very shrewd to recognize that language is often a tacit way to deaden people to sin. In the latest Tsonga dictionary, there are no words for generosity, logic, or nobility. There are, however, new Tsonga “words” (i.e. sentences) for sex toy, transsexual, transvestite and other terms too vulgar to write here. If the sin isn’t accepted, normalize it and the former will follow.

“Gay” is an important term to homosexuals for obvious reasons. Suppose in our village (where homosexuality is still offensive), the Tsongas begin using the word “ntsakisi” (happy) for homosexuals. Shall we say this terminology is neutral? In this case, “gay” is not just a term. It’s a tool.

The author would like us to think it is just a coincidence there is no word for “homosexuality” in Tsonga and many other African languages. Serendipity. Chance.

For the Christian, the fixed standard is the Bible—the Word of God. Absolute laws prevent the world from spiraling into more and more heinous sins.

We roll our eyes and sneer but without God’s infallible Word, on what basis are these arguments irrational? Scripture is the anchor that does not move when the tides of culture change. As Christians, we must love homosexuals—knowing at one time we too were in bondage to sin (1 Cor. 6:10-11). But we must never pander to their unrepentant claims. Doing so would be a rejection of love itself—which rejoices only in the truth (1 Cor. 13:6).