Summary: Twenty-four biographical sketches of Calvin’s closest friendships
This wasn’t a page turner but I’d still recommend the book because the chapters are short and the topic of friendship is sparse today in Christian literature. I should say books on godly masculine friendship are rare, not this.
Friends are often best at pointing out another’s weaknesses. Calvin knew he didn’t always have an easy personality. His friends undoubtedly noticed as well. But Calvin also seemed to value friendship more than most because his marriage was short and he had no children. Friends filled in the gaps.
Strengths: There were a number of interesting points about Calvin’s friendships. For example, most of his friends were not from Geneva where he ministered most of his life. Many Genevans were his enemies. His bond with Viret (over four hundred surviving letters between them) was built on trust—Calvin confiding in him some of his most embarrassing sins.
Calvin was a workaholic and sickly (gout, kidney stones, TB, hemorrhoids). His doctor friend refused payment for his services. Calvin dedicated a book to him. Calvin was also intimate friends with his own brother, even though his sibling’s wife was an adulterer and his kids ungodly.
Interesting, Martin Luther didn’t make the cut of twenty-four. Though Calvin respected Luther, he couldn’t stand his “stubborn and arrogant attitude” (p. 105). 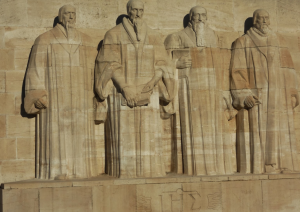 The best chapter was on William Farel (to the left of Calvin on the Reformation Wall). God used Farel and his passionate nature to keep the shy, bookish Calvin in Geneva. When Calvin objected, Farel promised God would curse him for seeking himself rather than the Christ. Farel and Calvin kept not secrets from each other, shared personal matters, and read each other’s mail. They were often at loggerheads too—Calvin seeing Farel as too lenient. The breaking point was in 1558 when Calvin refused to officiate the wedding of Farel (then sixty-nine years old) to his seventeen year old bride. This shameful marriage brought much gossip, but Farel still named the child after Calvin and they both remained friends.
Weakness: One peccadillo of the author was that he wasn’t willing to yea or nay a number of Calvin’s questionable decisions. Should Calvin have withdrawn the dedication in his commentary to his dear Dutch friends because they disagreed with him on the matter of double predestination? Should he have encouraged Caracciulo’s divorce of his Catholic wife, and then followed the RCC method of instead calling it “null and void”? Was Farel a better model by showing pastoral care to Servetus when Calvin didn’t?
Conclusion: Van den Berg ably presents Calvin as a model of friendship, which is the sharing in the deepest interests of others.
Excerpt:
“[Most of the preachers of the Reformation had beards in order to] demonstrate their patriarchal masculinity, while the celibate clergy of Rome did not feel that need. The Reformers married, established families, and grew beards. This also enhanced their authority when they preached, because it made them look like Old Testament prophets.” (p. 218)