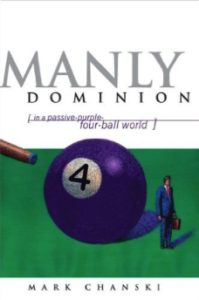 Here is a meat and potatoes manual on masculinity and the husband/father’s role in the home.

Mark Chanski is a seasoned pastor and father of five, and may have penned this while wearing a hunting knife and camo. He’s a tough guy with a soft heart. He gives the kind of wisdom your father did while chopping wood: work hard, career-plan early, don’t be a perfectionist, rear your children, think clearly, learn a trade. The teen and grandfather would equally benefit. Some chapters are only three pages long.

The best section was on “vocational laboring” but a survey of his 31 chapters shows the author’s wide swath of subjects: “Our Sinful Children”, “Evaluating Dating”, “Assertive Talking”, “Family Devotions”, “Job Hunting”. His excerpt from John Abbott’s The Mother at Home (©1833) was a gem.

Chanski shines in his section on decision-making. He blasts the subjective leading of the Holy Spirit. “Asking God for life directing impressions, is asking God for fresh special revelations. This is wrong and unbiblical.” (86) Since we all know of people who are so heavenly minded they are no earthly good, Chanski tells the humorous story of going to a wooded area to cut trees and his partner said: “Don’t you think we should first pray and ask God which tree we should cut down first?”

In sum, this book motivated me to be a better husband, father, and Christian. I learned nothing new and the well-turned phrases were few but the content was winsome, true, and masculine. I’ll give this book to my sons when they turn thirteen. I’ll read it with them, too.