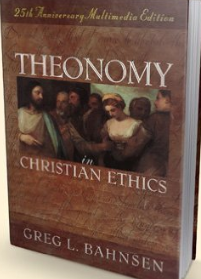 I first heard of Greg Bahnsen in relation to his cult classic debate with atheist Gordon Stein. I’ve listened to that exchange a couple dozen times. When it comes to presuppositionalism, the doctrines of grace, and a high view of God’s Word, he and I are in lock step. Theonomy—the teaching for which he is most known—is another matter.

This work by Bahnsen is probably the most scholarly defense of Theonomy (i.e. Christian reconstructionism), the presumption that there is moral continuity between the New and Old Testaments. It teaches that “the Christian is obligated to keep the whole law of God as a pattern of sanctification and…this law is to be enforced by the civil magistrate where [Scripture stipulates].” (36)

Before getting into the text, John and Paul Feinberg’s brief summary of the four views of the law may help. (1) Theonomists hold a continuity position whereby all the OT applies today. (2) The moderate continuity position believes the OT applies generally but must be adjusted in relation to the NT. (3) The radical discontinuity position believes all law has been abolished and Christians should follow the leading of the Spirit. (4) The moderate discontinuity view believes that while there is great overlap between OT and NT laws, Christ and his teaching ultimately fulfills the law and thus determines which OT laws are valid.

Mathew 5:17-20 is the key text pertaining to Jesus and his view of the law. Bahnsen’s interpretation of this passage is also the title of his second chapter: “The Abiding Validity of the Law in Exhaustive Detail.” That is, Jesus did not come to rescind any of the OT commands but instead came to confirm and restore them (plēroō) in full measure and these laws will not be invalid until the world comes to an end. Bahnsen’s exegesis of this passage is lengthy and vital to his position.

Assuming for now the tripartite division of the law (moral, i.e. The Ten Commandments; civil, i.e. Sabbatical Year; ceremonial, i.e. animal sacrifices) and acknowledging both sides of this debate generally agree that the ceremonial law is no longer binding but the moral law is, this issue really comes down to the civil law. Theonomy argues nations should be ruled by the standards of the Old Testament civil law. When it comes to difficult passages that imply Christians are no longer under the law, Bahnsen maintains the law is being renounced as a means to save, not as an obligation to obey.

Bahnsen should be commended for his exhaustive study. I agreed with many of his points,  including his chapter on the functions of the law. He was careful in his exegesis and insightful in his applications. Nonetheless, I did not find his arguments convincing. Here are ten reasons.