Missionary Minds is a series of ten-question exchanges with missionaries around the world. 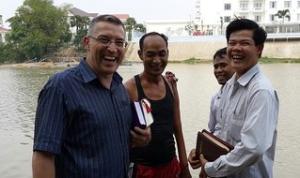 Forrest McPhail and his family have been involved in church planting and evangelism in Cambodia for most of 15 years. He has worked with missionaries from several different missions in several locations, including the capital city of Phnom Penh, the rural provincial capitals of Pursat and Samraong, and most recently, the city of Siem Reap. Presently, he is seeking ways to assist other missionaries, particularly those laboring in Cambodia.