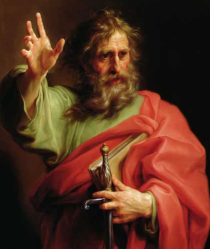 Before we set out on a little expedition through the Scriptures over the next few weeks, hacking our way through the jungle of Missions Myths, I thought it would be valuable to lay down a few presuppositions. I come to the table with some assumptions. Here are a few cards in my hand.

First, I consider Paul the missionary par excellence. This is not because he is an exemplar for modern missions in every way. He certainly is not. Nonetheless, he is unquestionably the best the church has to offer. There are a number of reasons for this.

One is his prominent place in the history of missions. The only extended treatment we have of the early church-wide missionary movement is the book of Acts, and Paul is the dominant figure. Second, when it comes to church planting, Paul calls himself a “skilled master builder” (1Co. 3:10), an astounding statement from one whose ministry was marked by humility. Third, the apostle ministered in a multicultural society much like today. Just as a typical southern California town brims with Asians, Hispanics, and whites, the Greco-Roman world of Paul’s day was loaded with those speaking Greek, Hebrew, Aramaic, and Latin. COEXIST bumper stickers were popular in Paul’s day too.

Second, Paul is a paradigm for missions, not a set of absolute rules. If we do not interpret Paul’s missionary movements in Acts this way, we’re headed for trouble. Just as the Proverbs are a set of general statements of wisdom for life, the book of Acts provides an assortment of patterns for missions. Just think of the charismatic chaos in the church that has come from taking everything Paul did then as every thing we must do now.

Let me close with one bad and one good example of this. Just because Paul began most of his evangelistic endeavors by preaching to the Jews in the synagogue does not mean that missionaries today ought to do the same thing. Paul’s example is not a law.

In compensation for my rude remark about Charismatics, let me use 1 Corinthians 14 as a good example for a paradigm in missions. When it comes to speaking in tongues, Paul argues for intelligibility. Since an unknown tongue doesn’t build up, there should always be an interpreter on hand.

In the same way, everything in the church today needs to be intelligible. For the missionary, this means (at the very least) that he should be laboring year after year to learn the native language. The details of his ministry may differ from Paul in Corinth but the pattern does not.

In sum, Paul is a paragon and a paradigm. We shall see the specifics of this in the coming days.