It is important to know where each Christian book on Islam fits. A Christian Guide to the Qur’an will help you interpret Islam’s holy book. James White’s books are more scholarly and help you prepare for debates. This paperback by Anyabwile is short, irenic, and personal—the kind of book you could give to your Muslim friend.

For those thinking, “I don’t even know where to start with my coworker Malik”, this book is simple and practical. It is first and foremost evangelistic. He even has a whole chapter on hospitality (“you coffee table should have an abundance of pastries…”). END_OF_DOCUMENT_TOKEN_TO_BE_REPLACED

In Galatians, the Judaizers were willing to accept only part of the message and in the end got full condemnation. They believed in justification by faith, only not by faith alone. In Islam, Muslims accept Jesus as Messiah, only not as the Messiah who is Creator of the universe and Savior of the world.

Insiders and C5 proponents believe that the way to bridge the gap is by blending in to the community and in doing so softening the vast differences between Christianity and Islam. Paul’s perspective from Galatians can help us here.

First, Paul’s gospel was not palatable to the unconverted. His goal was not to tickle the ears but teach the evangel. “For am I now seeking the approval of man, or of God? Or am I trying to please man? If I were still trying to please man, I would not be a servant of Christ” (Gal. 1:10).

Apparently some were accusing Paul of being a flatterer, acting like a flag that flies in the direction of public opinion. Anathematizing to hell anyone who twists the gospel (Gal. 1:8-9) quickly put an end to this farce. Paul did not remove the rough edges or offense from the gospel. “But if I, brothers, still preach circumcision, why am I still being persecuted? In that case the offense of the cross has been removed” (Gal. 5:11).

Second, the only times Paul “contextualized” with his hearers is when he made life more difficult for himself, not easier. Hence, the “all things to all men” passages in 1 Corinthians 9. Any definition of contextualization that made it easier to be a follower or proclaimer of Jesus was foreign to Paul. John MacArthur wrote:

[Paul] was not advocating a marketing plan. He was not making a plea for ‘contextualization.’ He was not suggesting that the message be made more acceptable….He was calling for self-denial and sacrifice for the sake of proclaiming the unadulterated truth to those who do not know Christ.

In conclusion, our recent analysis of the Insider and C5 Movements demonstrates they misappropriate contextualization to Muslims by softening the theological differences between Islam and Christianity and discouraging suffering for Christ.

The C-Spectrum is a practical tool some missionaries use to describe six types of Christian communities found in Muslim contexts. It is a coded scheme devised to see how contextualized one can become within Islam, even to the point of being considered a Muslim.

On the far left is C1, a traditional church that uses outward elements foreign to Muslim culture and considered Christian by both Christians and Muslims. On the far right is C6, supposed secret followers of Jesus but still considered Muslim by the Islamic community. Think of a C5 believer as one that makes a Muslim pause and tilt his head.

John Travis (a pseudonym) has written assiduously on this matter and is among the greatest proponents of what missiologists call the Insider Movement, a method of evangelizing Muslims that allows them to remain as active participants of Islam. Below is a summary of some C5 ideology.

In his article, “Must all Muslims Leave Islam to Follow Jesus”, Travis tells of a question his daughter brought to him: “Daddy, can a Muslim go to heaven?”

I responded with an Acts 15:11-type ‘yes’: If a Muslim has accepted Isa (Jesus) the Messiah as Savior and Lord, he or she is saved, just as we are. We affirmed that people are saved by faith in Christ, not by religious affiliation. Muslim followers of Christ (i.e., C5 believers) are our brothers and sisters in the Lord, even though they do not change religions.

Let us keep our eye on the ball. No one is arguing against the opportunity that even the worst of sinners have for salvation. Those of any false religion will be granted eternal life based on the merits of Christ. But this girl’s question addressed the results of such a supposed conversion.

Suppose his daughter asked a similar question? “Daddy, if a Buddhist, atheist, or Satanist has accepted Jesus as Savior and Lord, can he be saved and not leave his religion?” If Travis answers yes, then he has no problem with Christians dabbling in the occult and denying God’s existence. If he answers no, then I wonder why a Satanist must leave his place of worship but a Muslim must not. This brings us to the crux of the issue.

END_OF_DOCUMENT_TOKEN_TO_BE_REPLACED

The C-Spectrum in Muslim missions, the Insider Movements and how this touches evangelism in the Islamic community has been a much debated issue for years.

My experience with Muslims through formal debates, family meals, and one-on-one discussions have led me to believe that they are all too happy—mostly in an effort to gain leverage— to couch their theology in ambiguous Christian terms.

They are glad to espouse their love for Jesus and their willingness to follow him, but less reluctant to explain exactly what this means. The result is that Christians who do not know any better have a much more cozy perspective of Islam. What is worse, authors of the Insider Movement who do know better continue to encourage this kind of talk.

Contextualization simply means to act in such a way that one’s context would approve. In some ways this is good. A missionary seeking to reach the Tsongas of Mozambique, for example, should speak Tsonga, eat Tsonga food, and learn Tsonga culture. But some take contextualization further.

Exactly how much further has spurred endless disagreement. Missionaries have created vast systems (which we shall see in tomorrow’s post) to determine exactly how far a missionary can contextualize. In tomorrow’s post, we will address these structures and determine if they are biblical. 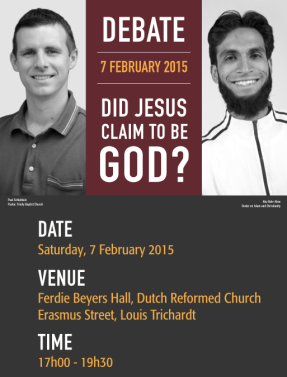 This Saturday I will be debating Muslim maulana Abu Bakr Akoo on the topic: Did Jesus Claim to Be God?

Proverbs 18:17 says, “The one who states his case first seems right, until the other comes and examines him.” Families, generations, and whole nations have fallen headlong into idolatry simply because no one stood up and said: “There’s another way.”

My opponent, who is also a friend, wanted to call this event an “Interfaith Dialogue” but I pushed for “Debate”. Dialogue is what two people do when they’re not sure where they stand. Debate is between two people with convictions.

All Christians must participate in debate, whether formally or informally. First Peter 3:15 says, “Always being prepared to make a defense to anyone who asks you for a reason for the hope that is in you; yet do it with gentleness and respect.”

I am asking for your prayers. The debate is 7 February, from 5:00-7:30 pm (09:00 – 12:30 Central Time). This is the first debate of its kind in the Limpopo Province of South Africa. The positive vibe and chatter throughout the town in recent weeks has been equalized by others who have written in to the local newspaper encouraging people not to attend. Columns like that only end up bringing more people out.

The debate will be recorded on video and posted on YouTube some time later. I will post my opening statement on Saturday.

Here is how the event will proceed:

IS THIS THE TEAM FOR ME? – This article from Postings guides prospective missionaries with a series of questions to ask as they consider which mission field suits them best. Short on Bible but very practical.

NEW BOOKS ON WORLD RELIGIONS – Here’s a list of three books published in ’13 addressing Islam and other world religions. Everything James White writes is solid.

10 THINGS EVERY CHRISTIAN SHOULD KNOW ABOUT ISLAM – this article carries weight because the author served for twenty years in Central Asia.

CHOOSING MARRIAGE OVER MISSIONS – Here is a transparent account of the strain foreign missions can have on marriage and parenting.

GOD IS DOING SOMETHING HISTORIC – “The price these converts pay for their conversion has not diminished with the arrival of modern times. Qur‘anic prescriptions remain unflinching: “…if they turn renegades, seize them and slay them wherever ye find them” (Qur‘an An-Nisa 4:89b). And these religious renegades are paying an incalculable price for their spiritual migration to Christ. Yet they continue to come. What began as a few scattered expressions of dissent is now emerging as substantial, and historically unprecedented numbers of Muslim men and women wading against the current of their societies to follow Jesus Christ. And it is only beginning.”