Crises in the world and in the church have always forced believers to wrestle with new ethical dilemmas. These challenges have compelled God’s men to bring Scripture to bear on scenarios they had previously never considered. The Apostle Paul never addressed the finer points of homoousios in his letters, but Athanasius did. Athanasius never addressed Popish anathemas, but Luther did. And Luther never addressed transgenderism, but here we are today.

One question the Covid crisis brings to the church’s doorstep is the matter of communion in abstentia. What should happen to communion when God’s people can’t commune? Is virtual communion valid? As a missionary, I’ve wrestled with versions of this question before. Suppose your church gathers in the middle of Mozambique and only has access to porridge and orange Fanta. In a more familiar setting, what about a deacon that brings the bread and wine to an isolated mother in the cry room? Are these legitimate? END_OF_DOCUMENT_TOKEN_TO_BE_REPLACED

Sexual immorality is rampant all over the world. Our African village is no different. When those inside our church fall to this sin, we counsel them with a spirit of love by urging them to follow these ten “R’s”.

This always takes time and patience. Teaching through a list like this may take hours or even days. But the repentance of a sinning brother is worth this kind of investment.

As many churches around the world celebrate the 500th Anniversary of the Protestant Reformation (October 31, 1517), our church members gathered to lift their voices in gratitude for the Five Solas: Sola Scriptura, Sola Gratia, Sola Fide, Solus Christus, Soli Deo Gloria.

We translated the Reformation Hymn (© Chris Anderson/Bob Kauflin) into Tsonga, sang it as a choir and congregation, observed its application in Acts 19 and capped it off with baptisms of new believers from Valdezia and River Plaats.

END_OF_DOCUMENT_TOKEN_TO_BE_REPLACED

If you want your son to be a great evangelist, give him the sermons of eminent preachers like Jonathan Edwards, John Paton, John Knox, John MacArthur, John Chrysostom, John Bunyan, John Piper, John Calvin, John Wycliffe, and John Hus.

Breaking the mold is George Whitefield, probably the greatest evangelist since the Apostle Paul. His sermons on both sides of the Atlantic are estimated at 30,000. God used Whitfield during the Great Awakening to bring about one of the greatest revivals in the history of the church.

He wasn’t just a Calvinist, he was a high Calvinist. He held the doctrines of grace to the highest degree, including the doctrine of reprobation. “I have never read Calvin,” he said. “My Calvinism comes from Jesus himself.” Elsewhere he remarked: “We are all born Arminians and it is grace that makes us Calvinists.” END_OF_DOCUMENT_TOKEN_TO_BE_REPLACED 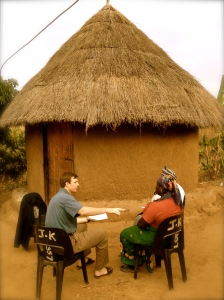 On October 1, 1866, the young Samuel Clemens—later known as Mark Twain—walked the roadway gripped with fear. His first comedy routine was just a day away and he had come to realize that his material was anything but funny. Earlier that day he had hired three stormy voiced men to sit in the audience and laugh with gusto.

But now he happened to pass on the street a drunken character that said to Twain: “You don’t know me, but that don’t matter. I haven’t got a cent, but if you knew how bad I wanted to laugh, you’d give me a ticket. Come, now, what do you say?”

Anyone familiar with evangelism knows that this is not how unbelievers approach the gospel. “If you only knew how badly I want to follow Jesus and receive eternal life, who’d give me the truth. What do you say?”

But we are afraid to tell our family, neighbors, and co-workers about Jesus, and fear can turn us into cowards. The chief priests and scribes sought to put Jesus to death because they “feared the people” (Lk. 22:2). The blind man’s parents didn’t evangelize because they “feared the Jews” (Jn. 9:22). Government big wigs in Israel believed in Jesus but wouldn’t confess him for “fear of the Pharisees” (Jn. 12:42). Herod kept John the Baptist alive because he “feared the people” (Matt. 14:5). Joseph of Arimathea was a secret disciple of Jesus for “fear of the Jews” (John 19:38).

WHEN FEAR IS GOOD

A few preliminary points may help here. First, our goal in evangelism should not be to eliminate fear all together. Rather, we must strive to work through the fear and overcome it. Even the great apostle Paul ministered to the Corinthians “in fear and much trembling” (1 Cor. 2:3).

Second, fear in evangelism is healthy and mixes well with other emotions. Matthew tells us that the women at Jesus’ tomb left “with fear and great joy” (28:8). After Jesus raised the widow’s son, Luke tells us: “fear filled them all, and they glorified God” (Luke 7:16). So fear mixes well with joy and worship. It also blends well with evangelism. If we never felt the sting of terror while telling our boss the Gospel or our neighbor the truth of Christ, we would be tempted to forget the enormity of the message. We talk of football and shopping casually. We speak of Jesus and redemption with measured trepidation.

When a lady accused Charles Spurgeon of using too much humor in his sermons, he told her: “Well, madam, you may very well be right; but if you knew the number of jokes I do not tell, and the number of things that I refrain from saying you would give me more credit than you are giving me.”

As stated in Preaching and Preachers, the rule Martyn Lloyd-Jones uses for humor in preaching is that it was only allowable if it is natural. The Doctor uses the word “abomination” for the preacher who tries to be funny. Spurgeon was a naturally humorous man. Whitefield was very serious. So the preacher must know himself. Lloyd-Jones:

I would not dare to say there is no place for humor in preaching; but I do suggest that it should not be a very big place because of the nature of the work, and because of the character of the Truth with which we are dealing. The preacher is dealing with and concerned about souls and their destiny. He is standing between God and men and acting as an ambassador for Christ. (241)