A compassionate but uncompromising account of the friendship between a Christian author and Christopher Hitchens—one of the world’s most notorious atheists.

A surprisingly good read by Taunton. This kind of book isn’t easy to write. It could appear the author is trying to capitalize on the wickedness and death of an outspoken atheist. I was expecting Taunton to go soft on Hitchens. He’d grovel before him like so many others. Taunton didn’t. He struck a perfect balance. It’s the kind of book you could give to an atheist friend as an evangelistic tool: lots of biography, several Scriptures, a warm but firm style.

END_OF_DOCUMENT_TOKEN_TO_BE_REPLACED 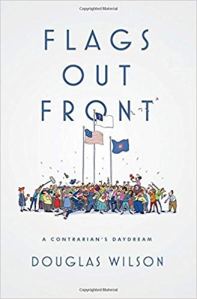 Summary: a satirical novel mocking the worst of evangelicalism to show all things rest beneath Christ’s feet

Wilson packages all this in a funny little novel, sprinkles in some romance, rebukes us for our fear and urges us to fight! The Christian flag story is just a platform for Wilson to show that Christ should reign at home, at school, and in the public square.

Pros: Wilson picks the right people to be the heroes. Hollywood loves carrying Jezebel and Ahab away on their shoulders. Not Wilson. I want my sons to be like the college kid Trevor (tough, competitive, and engaged to be married) and my wife to stay like Maria (savvy, beautiful, manager extraordinaire). And I want to be like Dr. Tom: humble and courageous. Wilson knows who the good guys are. These are the ones we’re to imitate (1Cor. 11:1). END_OF_DOCUMENT_TOKEN_TO_BE_REPLACED

Summary: an autobiography of Benny Hinn’s nephew and how he finally left the prosperity gospel and found Christ.

You want a history of the prosperity gospel (PG) in America? Read Bowler. A theological treatise against the PG movement? Read Strange Fire. But suppose you have a buddy at work with anointing oil in his cubicle and bumper stickers flashing Isaiah 53:5 (“with his wounds we are healed”). He loves TBN. He reads everything Crefloe Dollar and Joyce Meyer put out. He’ll never pick up a hardcover by Justin Peters or Johnny Mac.

This might be the book to give him. Sometimes stories that put you in the moment (“I carried cash–a lot of cash”, p. 57) can be more convincing than assertions. Benny Hinn is perhaps the world’s most well-known prosperity evangelist. Benny grooming his nephew to be his successor, only for Costi to abandon this teaching and move to orthodox Christianity would be like the brother of the infamous atheist Christopher Hitchens coming to faith in Christ. This happened by the way. God has a sense of humor. END_OF_DOCUMENT_TOKEN_TO_BE_REPLACED

Summary: a simplified and abridged theology covering the major themes of systematics and applied to African life today

Samuel Waje Kunhiyop (SWK) wants to be true to Scripture and writes African Christian Theology (ACT) in an effort to take the African situation seriously. This is a thoughtful yet rare contribution to the African church and deserves to be read carefully.

Strengths: (1) ACT interprets theology contextually. Why an African Theology? SWK is correct that “Scripture is always interpreted within a context” (p. xiii). Thus, John MacArthur’s Biblical Doctrine written in 21st century America gives significant attention to doctrines like cessationism and gender roles when John Calvin’s Institutes does neither because it was written in 16th century France. SWK scratches where the African itches. He doesn’t waste time on proofs for God’s existence since rare is the African atheist. END_OF_DOCUMENT_TOKEN_TO_BE_REPLACED

Summary: a lucid, concise and superbly researched historical account of the prosperity gospel—the best in print.

Bowler took years visiting health and wealth churches around the US in research for this book. Ironically, incurable colon cancer struck this young Duke professor as the book was going to print.

She argues the prosperity gospel (PG) centers on four themes: faith (a power turning words into reality), wealth (faith in the pocketbook), health (faith in the body), and victory (faith’s final goal). These topics became four of the five chapters.

The book’s subtitle (‘a history of the American prosperity gospel’) could just as well remove the word “American” since much of the PG round the world pulls from the US anyway.

Pros: (1) She names name by the hundreds. In this regard, she’s Paul-like (1Tm. 1:20). They called Puritan Richard Sibbes the sweet-dropper. Bowler is the name-dropper. She’s coming after you if you’ve influenced American prosperity over the past 100 years (e.g. Jakes, Cho, Lake, Bakker, Roberts, Meyer, Peale). Her favorite target is Joel Osteen. (2) Her tone isn’t polemical. She writes as an objective researcher. I consider this a plus because good arguments don’t need white knuckles and red faces to terrify the reader. (3) The lengthy bibliography on PG/Word of Faith works is invaluable.

(4) She must have researched a million pages of PG literature (cruel and unusual punishment) and then gives the reader the choicest dreck. For example, “Plant the seed of faith and put away the Washington’s” or this gem from Creflo: Dollar “I own two Rolls-Royces and didn’t pay a dime for them. Why? Because while I’m pursuing the Lord those cars are pursuing me” (p. 134). (5) Bowler excels at showing how earlier metaphysical mind-power repackaged itself into positive thinking (‘picturize, prayerize, actualize’) which repackaged itself into the modern prosperity message.

Cons: Besides the occasional Scripture reference, Bowler rarely interacts with the Bible. True, this is a history, but I expected more from a professor of religion.

Conclusion: Most missionaries and pastors should read this because most missionaries and pastors do battle royal against the PG in their ministry. This book gives the historical underpinnings of the deadliest poison within Protestant churches. The daily Christian should consider this hardback as well since “soft prosperity” (think Osteen) is more pervasive in the church and home than they know.

“[Speaking in tongues] became the gateway drug for other gifts of the spirit” (70).

“At Paula White’s Without Walls church, a feminine aesthetic pervaded the sanctuary and encouraged giving through the provision of floppy pink envelopes which tithers were encouraged to wave during the service” (129).

“John G. Lake and his ‘God-men’ theology pumped confidence into the veins of faith believers who called each other ‘overcomers,’ ‘dominators,’ and ‘little gods’” (179).

Summary: an interactive storyline designed to help the reader identify and clarify their worldview and its implications.

Don’t read this little paperback from cover to cover. Follow the “Choose Your Own Adventure” plot to help you discover the consequences to your worldview (e.g. atheism, polytheism, pantheism, etc.) and other big questions (“Does God exist?” “Is there more than one true religion?”).

Pros: (1) Creative. The book is short. But it must have taken considerable thought to piece it together. (2) This is a nice, little title to give the unbeliever in the cubicle next to you. The size won’t intimidate him and it will make him think. (3) This is a good refresher on apologetic terms like Nihilism (what does that word mean again?) and Deism (“a halfway house on the road from Theism to Atheism”). (4) This is a good refresher on apologetic arguments, like why the problem of evil is harder for the atheist than the Christian. (5) His six-page intro on worldviews was excellent.

Quotables: “Worldviews are like [brains]: everyone has one and we can’t live without them, but not everyone knows that he has one.” (12) 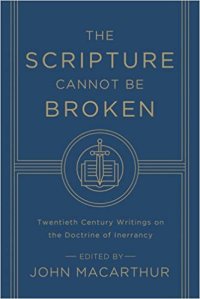 The Bible is without error, transmitted perfectly with the exact message God gave to mankind.

But the doctrine of inerrancy is under attack today like never before. Those in today’s religious (and evangelical) circles with a low view of Scripture are strangling the church, holding back from her the life-giving oxygen of an inerrant text.

From Spurgeon’s Down Grade Controversy, to German Liberalism, to Emergent Theology, the core argument remains the same: the human penman who transmitted Scripture must bring with them errors in biblical teaching.

The Scripture Cannot Be Broken champions a high view of Scripture. It compiles 14 of the greatest essays on inerrancy of the past 70 years, including authors like B.B. Warfield, J.I. Packer, and John Frame. It recounts the many ways people attack inerrancy, like nuancing inerrancy and infallibility, embracing pragmatic philosophy in the church, and promoting extra-biblical revelation. Often, this comes from the insatiable thirst for approval from academic elites.

The book also addresses a host of common objections to inerrancy, such as circular reasoning, human penman, presuppositionalism, the ambiguity of theópneustos, and the absence of the original autographs.

Conclusion: This book is applicable not only for Scriptural pessimists but biblical conservatives. Beware those in the latter camp. Rarely does one move from liberalism to orthodoxy. As Harold Lindsell said, it is often a one way street in the wrong direction (27).

I found the lists of what inerrancy is not in chapters 10 and 11 very helpful. The best chapter was “The Meaning of Inerrancy” by Paul Feinberg, with a close second going to author Robert Preus.

As one author put it: the Prosperity Gospel is Christianity’s version of professional wrestling–you know it’s fake but it nonetheless has entertainment value.

As a missionary in Africa, I value this book because the errors it addresses are deeply embedded among our people. The slogan “What I confess, I possess” was first coined in the early 20th century by a white American Baptist but is repeated thousands of times over in innumerable 21st century African churches. END_OF_DOCUMENT_TOKEN_TO_BE_REPLACED